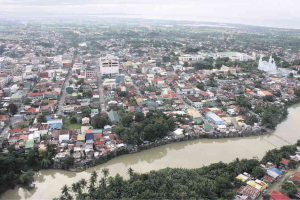 Lucena City is the capital of Quezon Province. It is classified as a highly urbanized city, and sustains a population of 266,000 as of 2015 census, divided into 33 barangays. Although geographically a part of Quezon Province, it is politically independent from the latter.

The City Government of Lucena shall uphold honest and transparent governance, boost investment opportunities, improve the quality of health and education, create employment through establishment of technological and agro-industries, ensure protection and sustainability of the environment, and promote peace and order that will uplift the Lucenahins’ quality of life.

The City of Lucena, imbued with strong and moral leadership, God-loving and empowered citizenry envisions to be the premier city in Southern Tagalog providing sustainable development, creating opportunities for socio-economic, agro-industrial and technological growth, ensuring a peaceful and safe environment and improving the quality of life of its people.

The area now known as Lucena City first appeared in records under the name Tayabas when it was founded by Franciscan priests Juan de Plasencia and Diego de Oropesa between 1580 and 1583. Incidentally, Tayabas was also the name given to its encompassing province now known as Quezon. Today, the name Tayabas is carried by the city next to Lucena.

By the 16th century, the Spaniards changed the town’s name to Buenavista in tribute to its scenery. This was later changed to Oroquieta, and then to Cotta in allusion to the fact that the town was transformed into a fort (kuta) to defend against Moro pirates. Today, the name Cotta is reserved to one of Lucena’s 33 barangays.

It was in 1879 when the town’s name was officially changed to Lucena in honor of a Spanish friar, Rev. Fr. Mariano Granja. In 1882, Lucena became an independent municipality, that is, politically separate from the rest of Quezon Province.

On June 17, 1961, through the efforts of the late Congressman Manuel S. Enverga and Congressman Pascual Espinosa, Lucena became a Chartered City by virtue of Republic Act No. 3271. August 20, 1961 marked its inauguration.

Lucena City is located 137 kilometers south of Manila, accessible via the Southern Luzon Superhighway. It is considered to gateway city to the Bicol Region, as public transportation routes from Manila the rest of Luzon converges on Lucena City on the way to Bicol.

It covers a total area of 8,402.66 hectares, with an average elevation of 22 meters above sea level.

Lucena is classified as a highly-urbanized city, a status it has been holding since 1991. As per DTI records of 2019, there are over 6,000 registered business establishments, 80% of which are micro-businesses and SMEs. In that same year, said businesses generated around P1 billion in revenue for the local government.

The city’s core is dominated by merchandising and service establishments, while manufacturing concerns are located in designated areas in the outskirts of the city. Being a coastal city, fishing and other marine-related businesses are still a staple for a considerable portion of the population, as well as farming.